I’ve decided to come back, and bring life back to Devblast. The baby I nurtured for years and renamed twice had been abandoned, but this changes now. In this post, I will be sharing with you what happened in 2018, all the things that kept me away from writing and working on Devblast (spoiler alert: most of it was due to my day job and my “laziness”). I will also share with you how I’m fixing it this year, and making sure I have time for it (even if it’s just a little bit).

I’m a bit disappointed with my lack of commitment to Devblast. I can’t change the past, but I can lay it out on paper in an honest way.

Don’t get me wrong though. I still think I accomplished a lot. I spent most of my days working with a group of amazing people at OmiseGO, and traveled all around the world to meet and discuss the innovative field I’m currently in. Yet, I spent most of my free time chilling, and that’s when I could have put some work towards improving Devblast.

Overall, I’m happy about everything that happened - I don’t regret anything, I just take it in as a learning experience that will help me stay on the path I set in the future.

At the beginning of 2018, I had been working for OmiseGO for 4 months as Team Lead and I just started dating my girlfriend. I was therefore super busy - spending my days at the office (or working remotely at home 2-3 days per week), and spending the evenings with my girlfriend.

Our main goal at OmiseGO for this quarter was to open-source (in beta) the e-wallet application, simply called eWallet, that we had been working on. This was a huge milestone for us with a big impact: all our work from that moment onwards would be public.

I literally did nothing for Devblast. Oops.

But I enjoyed exploring new places in Bangkok, and went to Koh Samui to enjoy the beach again. I also picked up a new hobby: building Gunpla. That’s a shortcut for Gundam Plastic Models, which is basically assembling plastic models of giant mechas. Yup, that’s a pretty nerdy hobby, but it’s so much fun! Once you get bored from just putting things together by following the manual, you start hitting the really interesting stuff: customizing and painting!

Here’s how an assembled model looks like (just did a bit of panel lining, which means using a black marker to fill the seams): 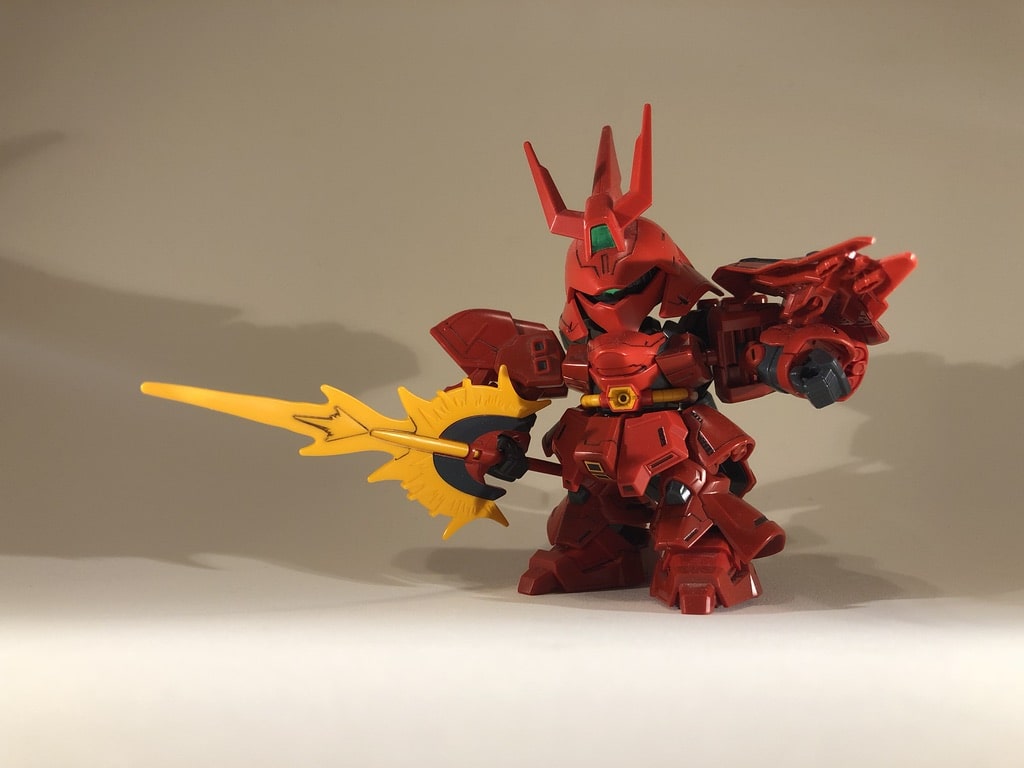 Then, I started doing some terrains to go with the stuff I was building: 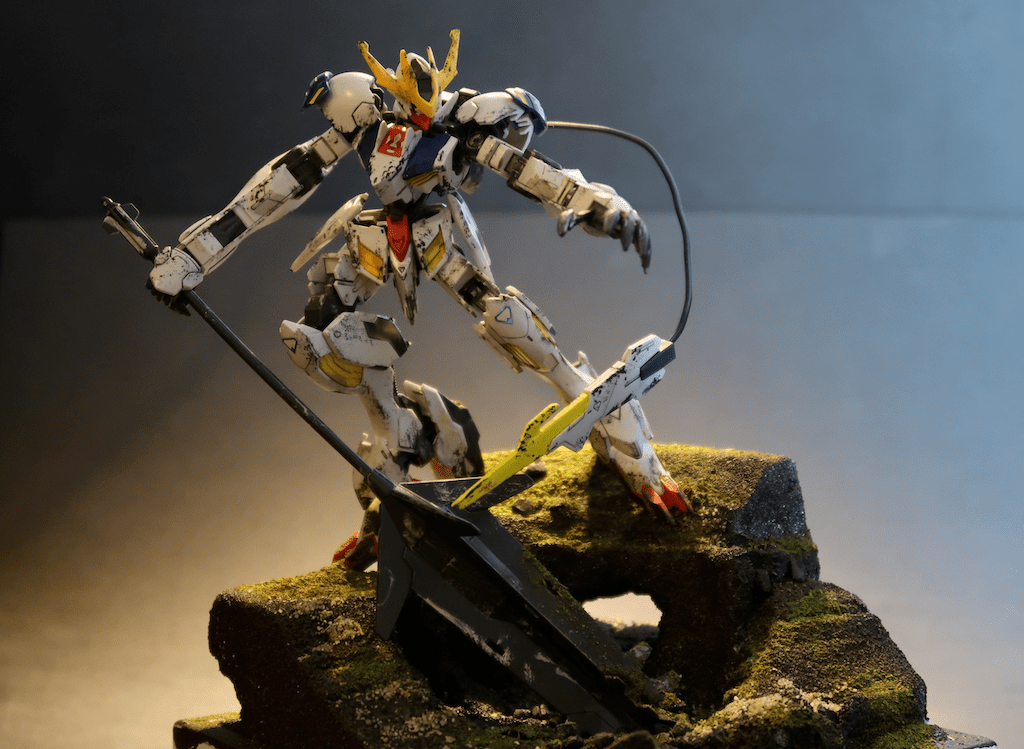 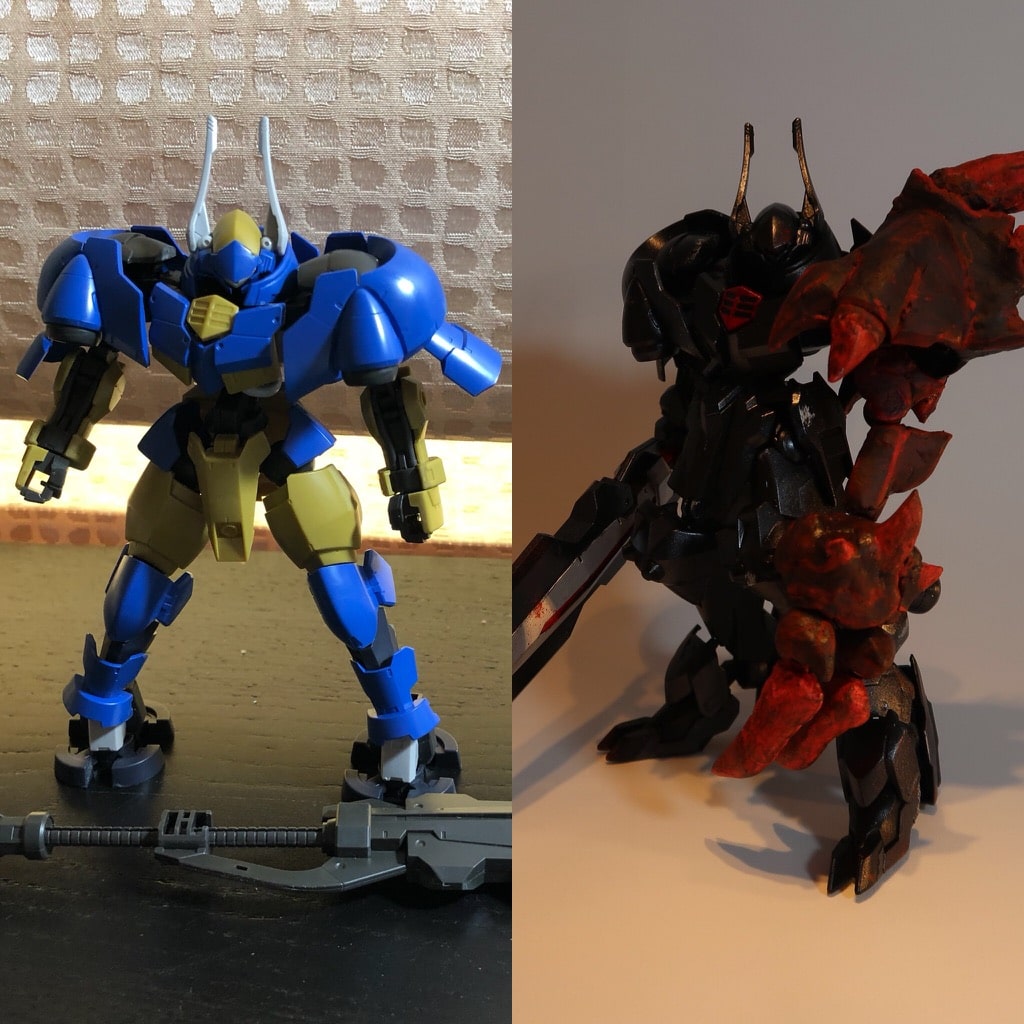 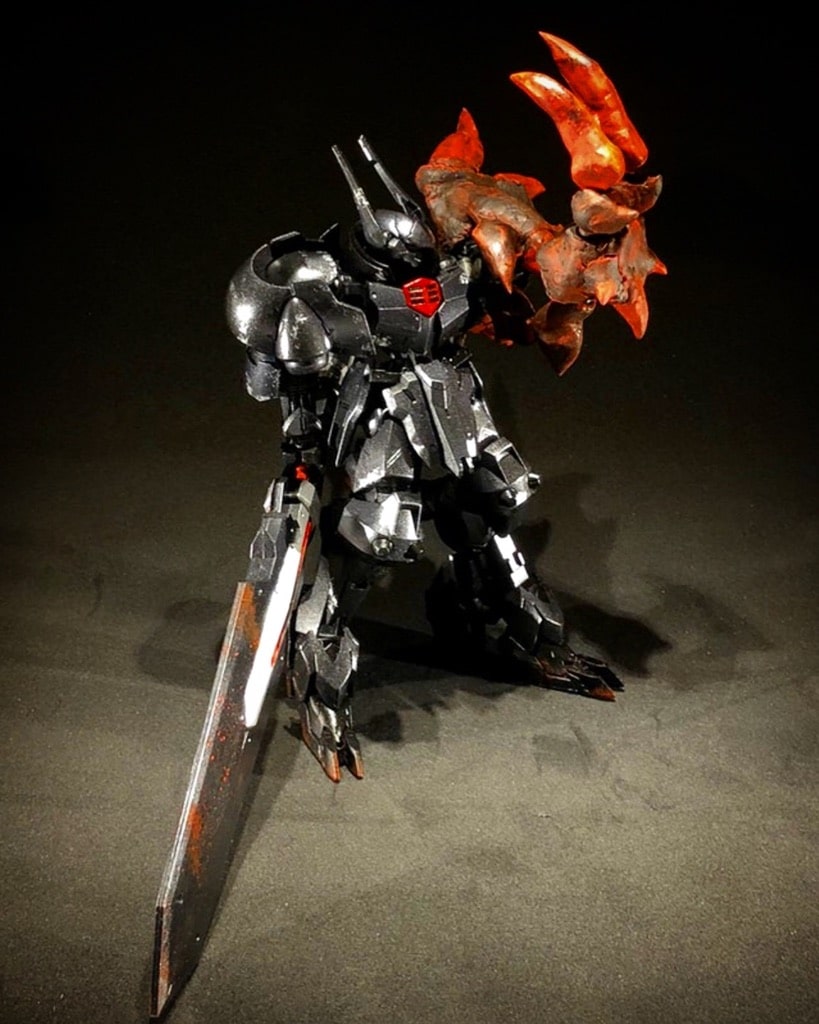 I took some inspirations from Nightmare, the badass sword fighter from Soul Calibur. At that point, I thought it looked good, but I wanted to do some more work on it.

The second quarter of 2018 wasn’t really different from the first one. One thing that changed though, is traveling. OmiseGO sent me to a blockchain conference in Toronto in April called EDCON. This was my first time in Canada and it was a great experience! The jet lag was awful and really put me down, but other than that, it was awesome. The best part was hanging out and chatting with really smart people like Vitalik Buterin, David Knott and Joseph Poon.

We kept working on the eWallet at OmiseGO, this time to get it out of beta and release the 1.0 version.

During my free time, I once again didn’t do anything for Devblast. Instead, I had fun playing Zelda: Breath Of The Wild and building gunplas.

First, I improved my Nightmarish build by making a sword and a platform from scratch for it: 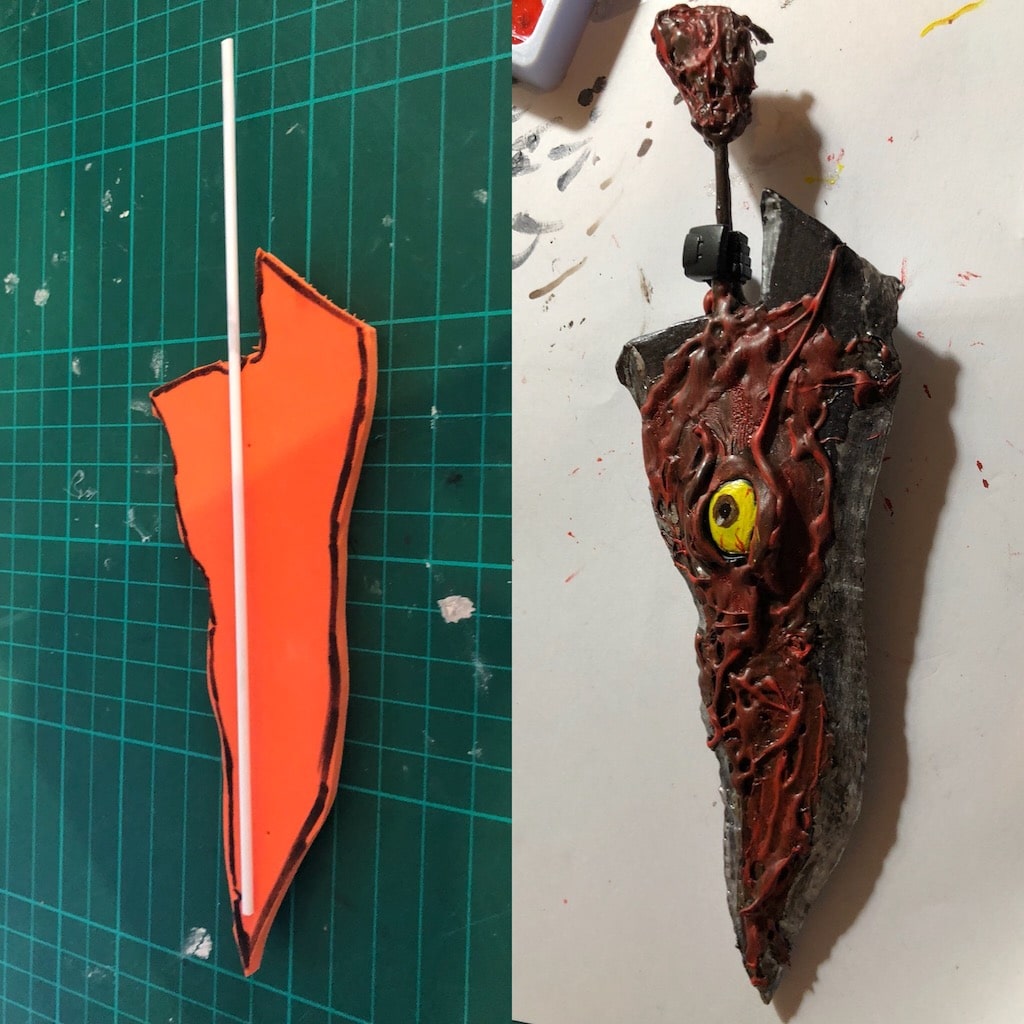 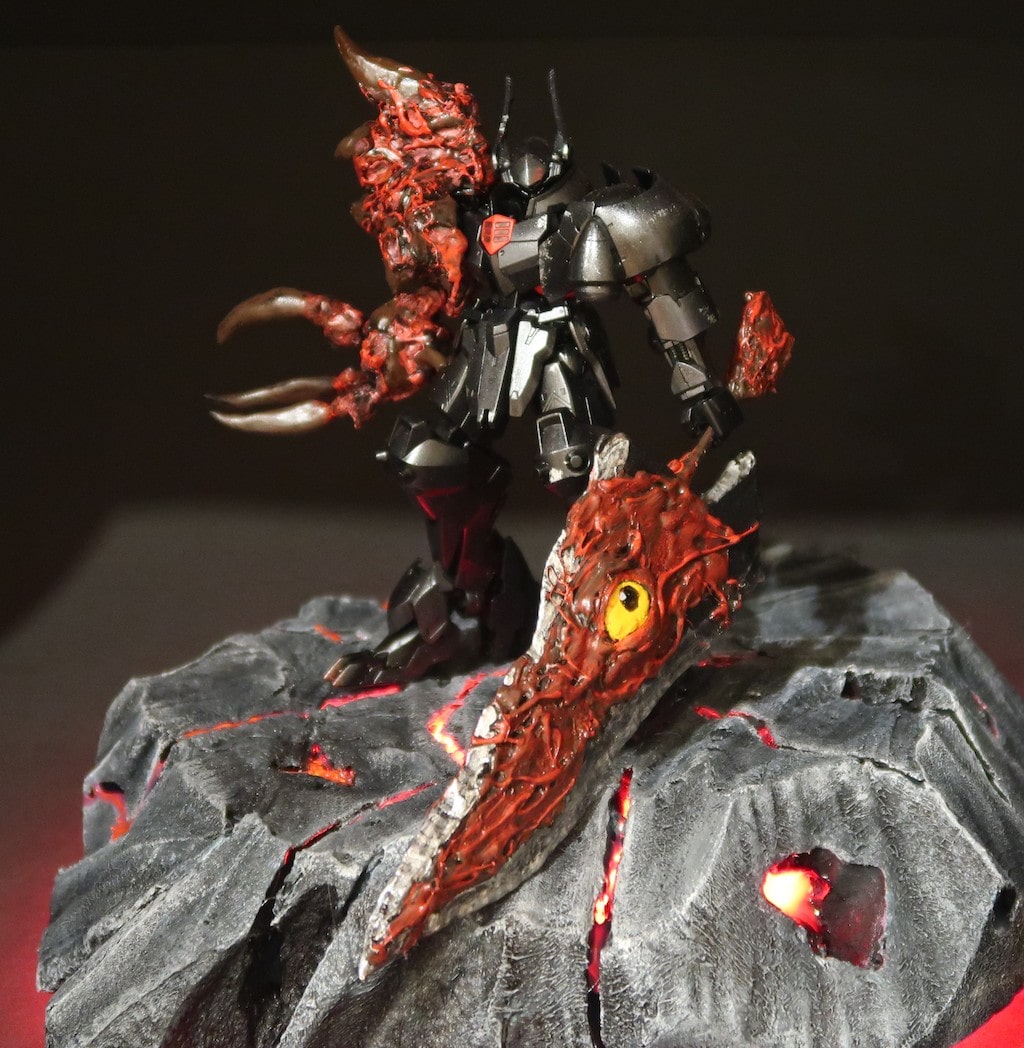 I also got an airbrush and started playing around it: 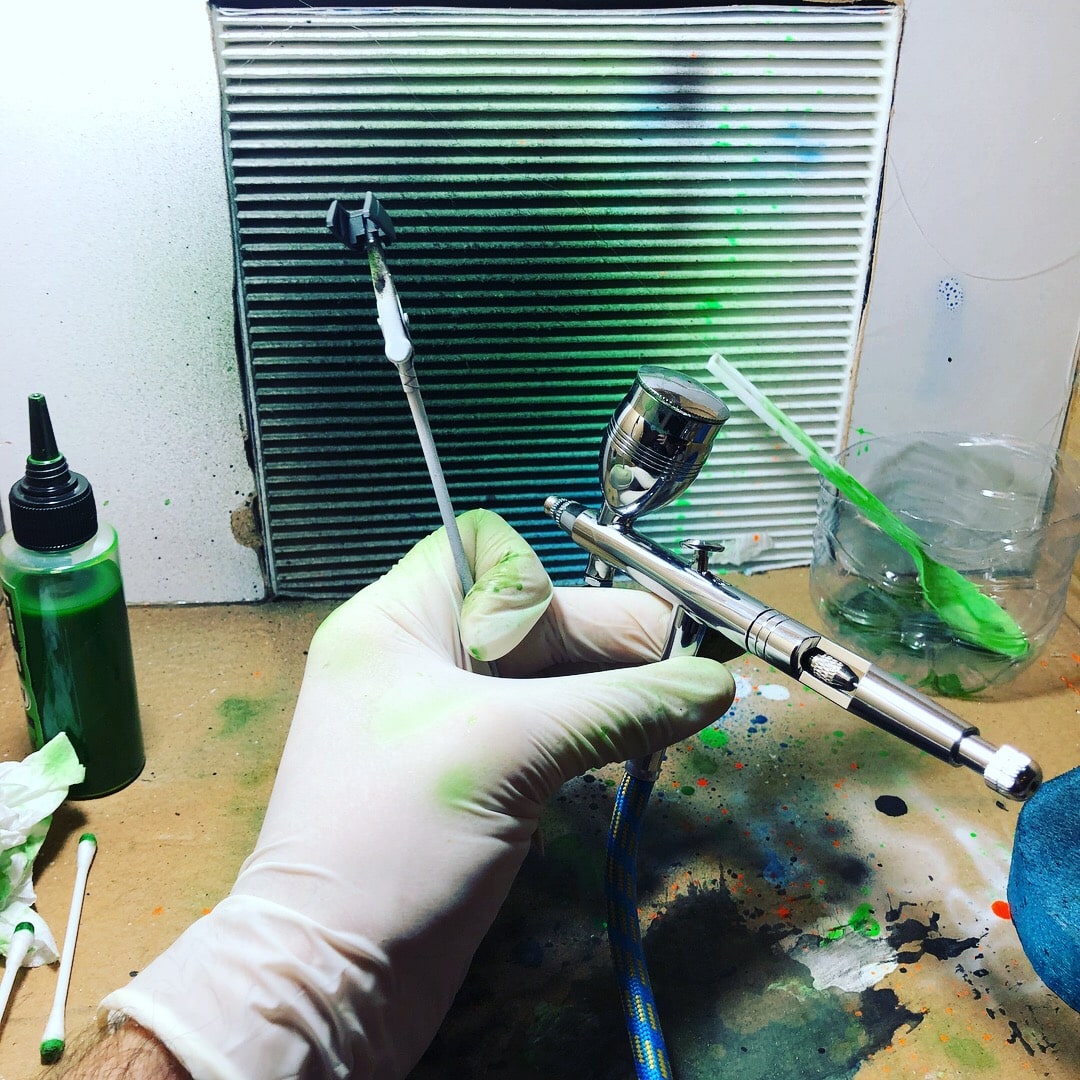 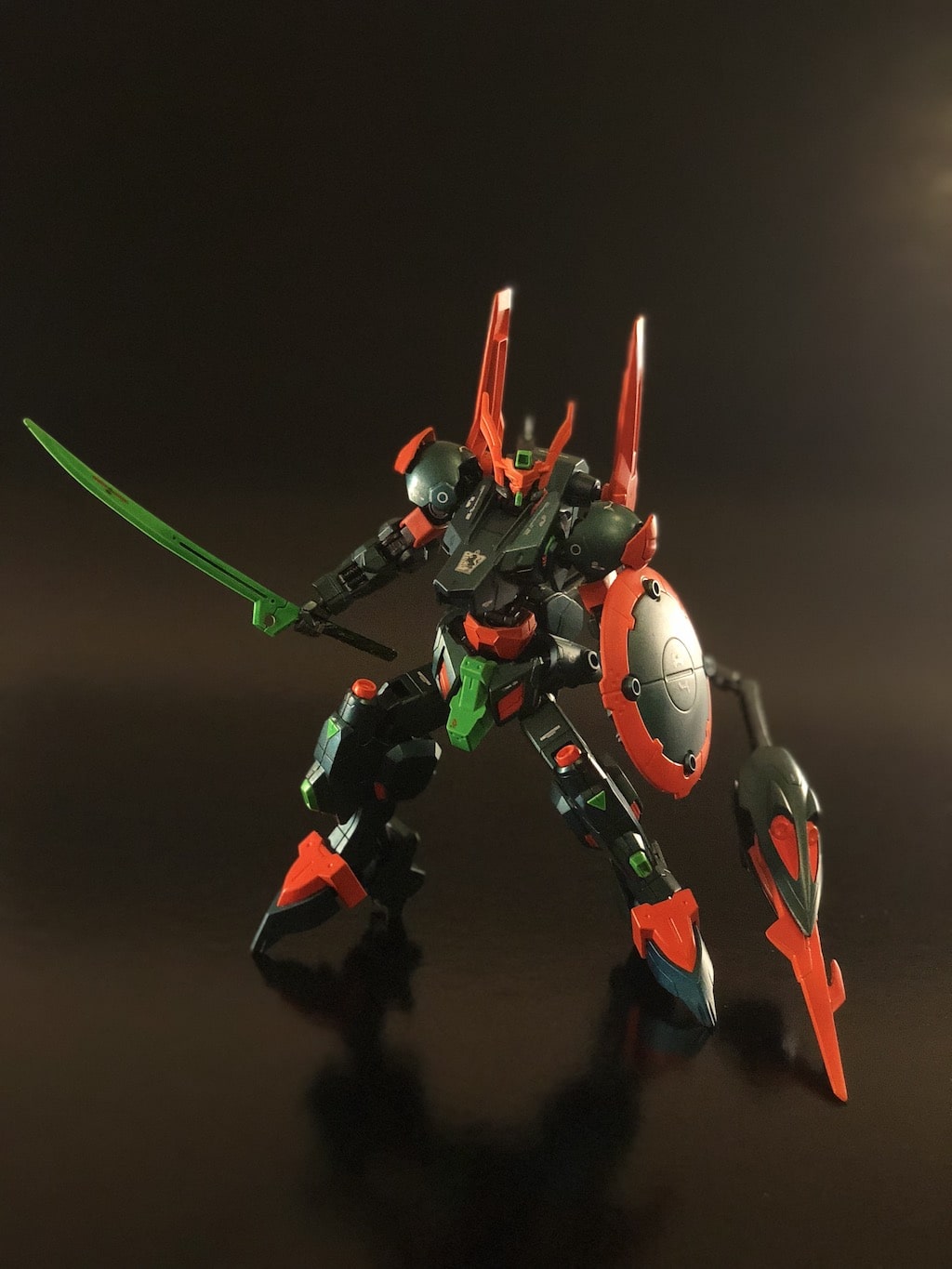 And just like that, it was July and we were halfway through the year. The work continued at OmiseGO, focusing on a few fundamental features for enterprise software. But we also started to educate people face-to-face. We organized three workshops in the SEA region: Tokyo, Shanghai, and Singapore. I moved a lot in those 3 months, especially when you also add a trip to Seattle, in the US, for an Elixir conference. I was lucky enough to meet and chat with José Valim, creator of Elixir (He is super nice!).

All those workshops were great. Traveling to those countries where I’ve never been and working with them on an eWallet integration was very rewarding.

I also got sucked into World of Warcraft. Again. With the release of Battle For Azeroth, my best friend and I started playing again. Leveling together to the max level in less than one day was a blast! We started at 5 AM (the release time in Thailand) and I had a bunch of Monster Energy cans ready to power me through the day. I think we were done by 8 PM \o/

I barely did any Gunpla builds during those three months. Let’s not even mention Devblast…

Finally, the end of the year was close. A lot of things changed for me in those three months. It started pretty ordinarily in October. But somehow, during the month I stopped playing World of Warcraft. I just got bored and wasn’t interesting in what the game had to offer. Instead, I got back into Gunpla!

A few months back, I registered for something called the GBWC - Gunpla Builder World Cup, which is basically a bunch of people making awesome builds (honestly, at that level, you can call it art) in 20 countries. The finals are held in Tokyo between the winners from each country.

I had been working on and off on that project, some angel based on the Kshatriya Mobile Suit HG. I wanted to have that angel either fight some other dudes, protecting the Earth from an invasion from Hell, or just flying around. 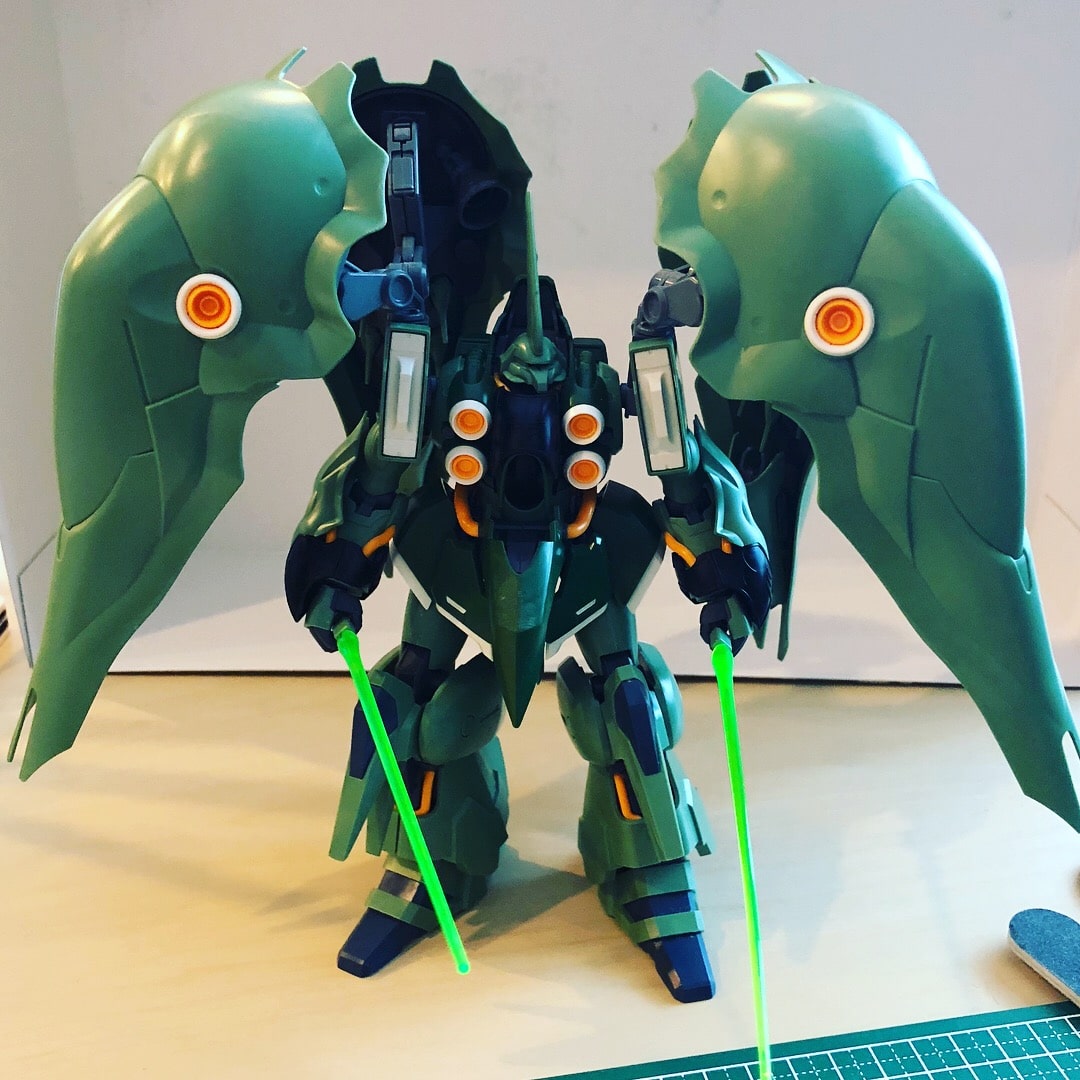 I was maybe 60% done with my angel at the beginning of October, but I had done nothing for the diorama. The GBWC Thailand was on November 5 if I recall correctly.

I kept working on my build and tried to get it done before the end of October because I’d be off to Prague for the Devcon for 6 or 7 days right before the GBWC.

I ended up having my angel ready: 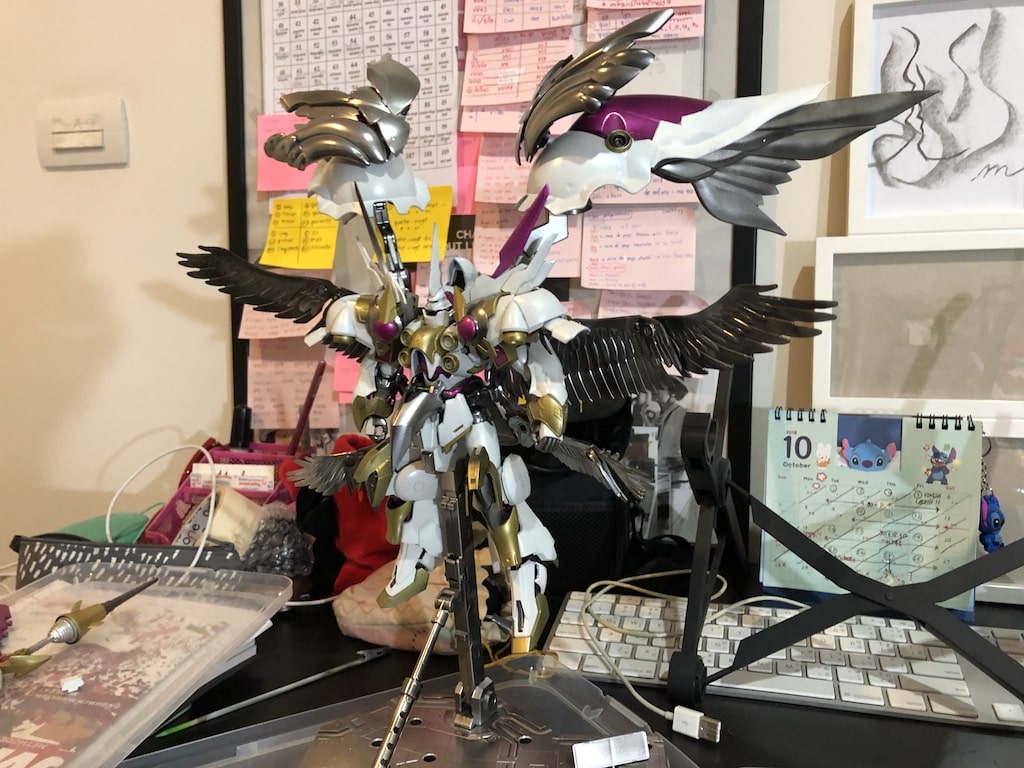 But that was it. I needed more, but I had no time… Off to Prague for 7 days. Once I got back, I finally figured out what to do. I started building a diorama with my angel fighting off two demons. I painted those two dudes super fast because I had no time. I built the base out of XPS foam and added a bunch of rods inside the angel to hold its weight from its foot. I then proceeded to make it look like his foot was being trapped by one of the demon’s tentacles: 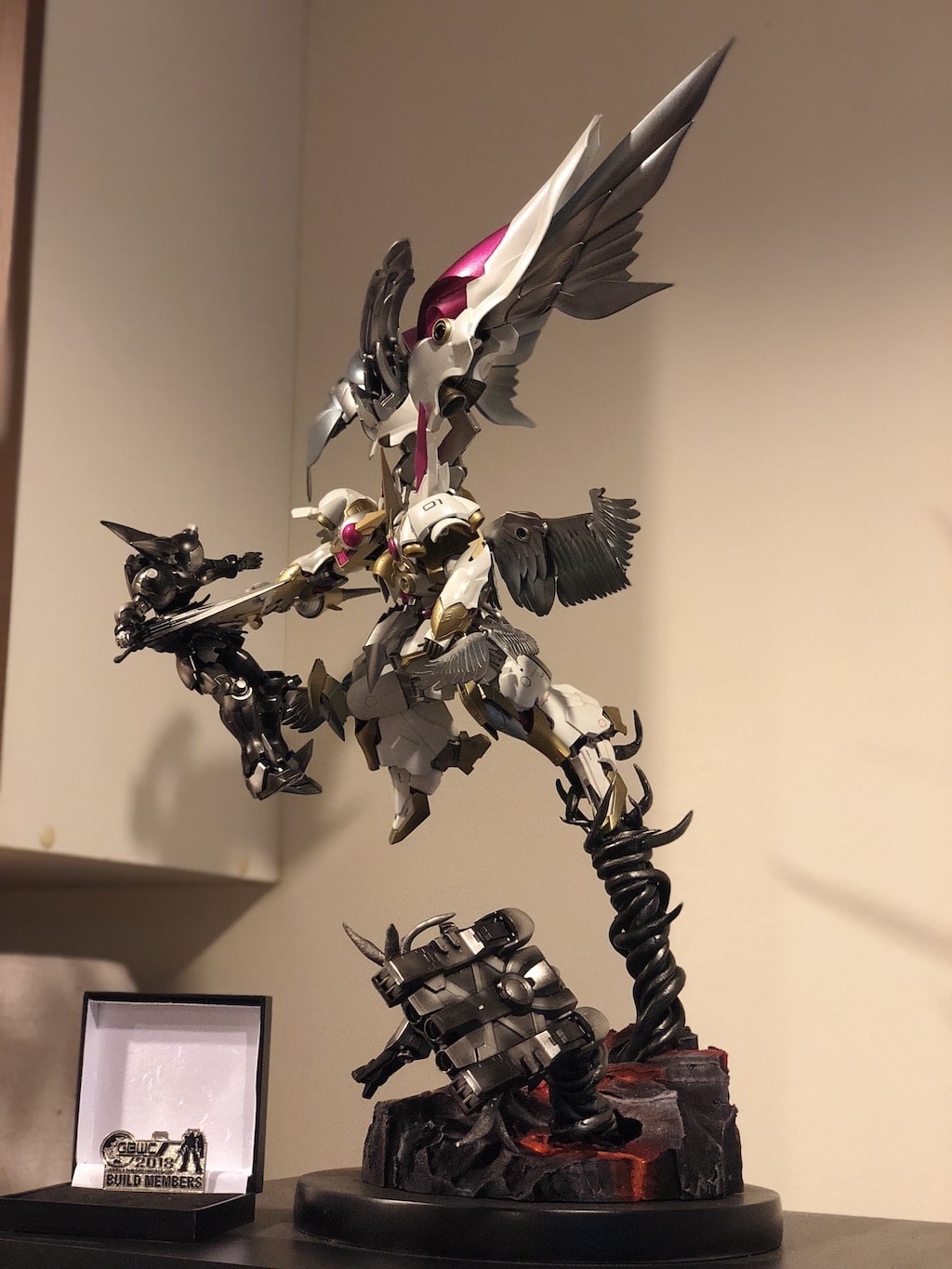 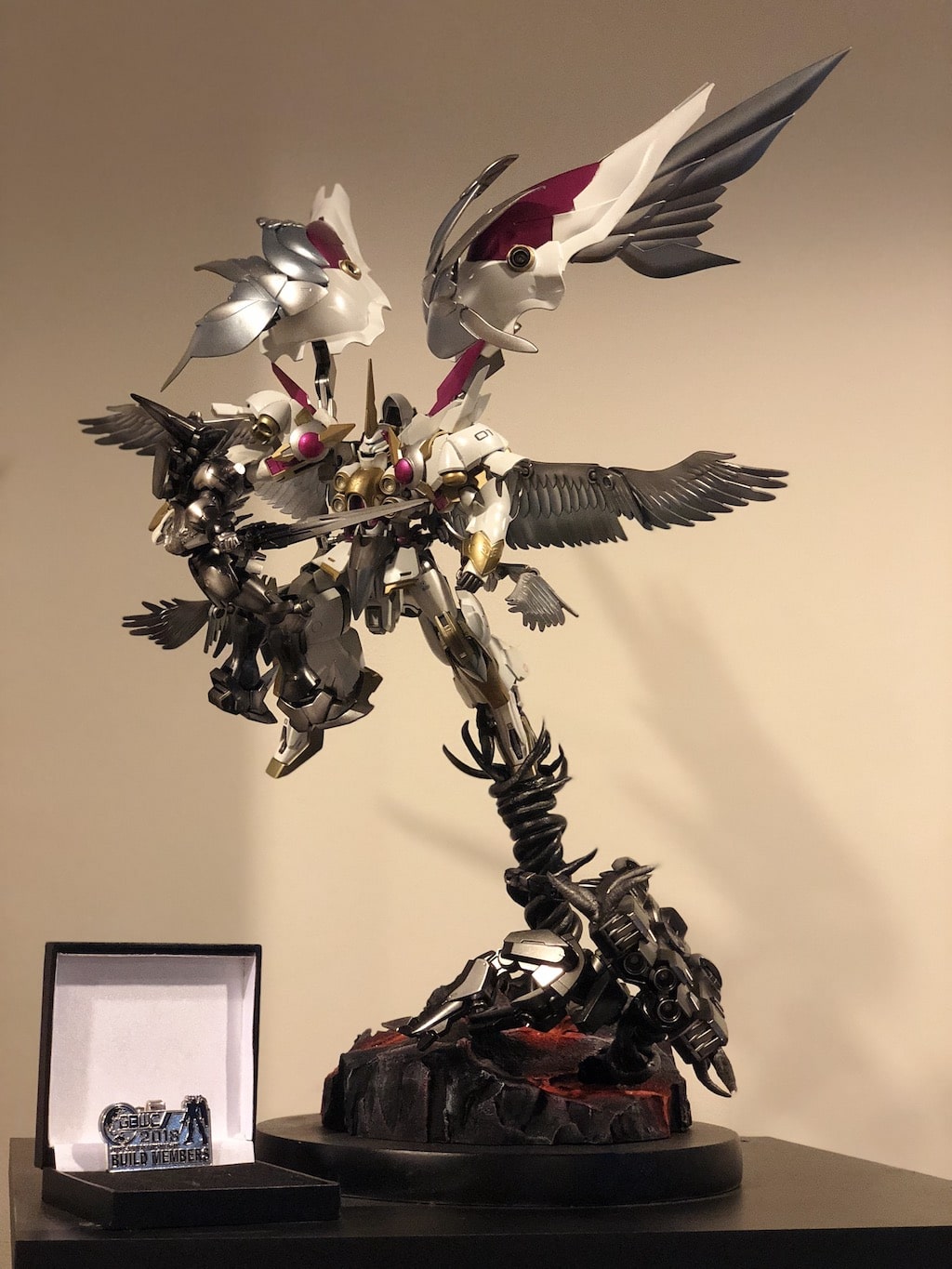 I slept at 4 AM for 3 days straight to finish it in time, and I did. I was so scared it wouldn’t hold. But it did, and I made it all the way to the other side of town in a taxi. Dropped my build and left it there for a few days. Unfortunately, I didn’t win, but that’s all right - I finished the build and that’s all I want. To give you an idea of the competition, here’s the guy who won: 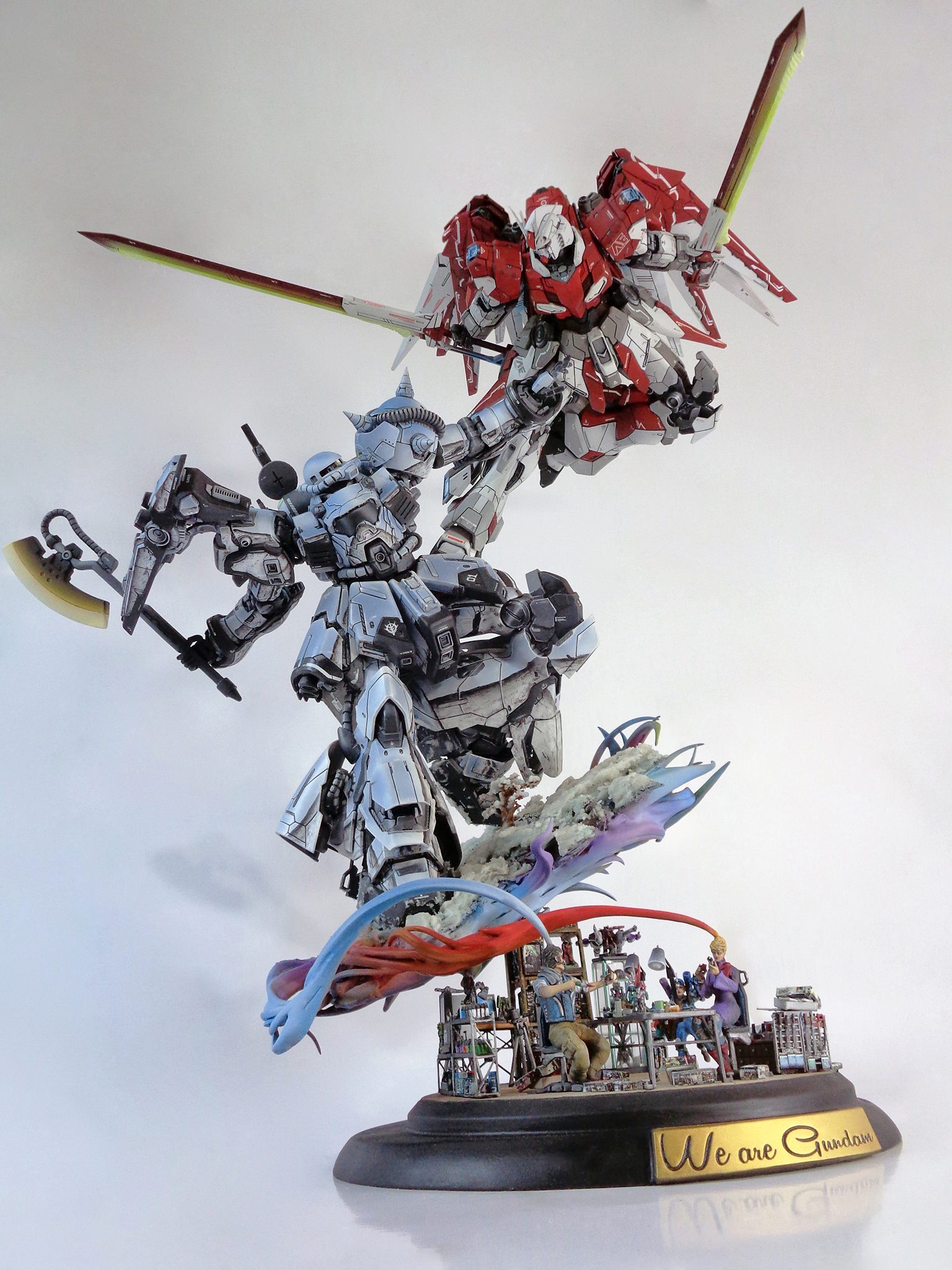 With all that done, it was time for me to find something else to do… and that led me to make a lot of changes in December.

I started using the Coach.me application again to track habits. I got back into reading on a daily basis, working out, eating healthier, studying Thai and Japanese every day and… making time for Devblast! I started working on upgrading Master Ruby Web APIs to Rails 5.2. After a few weeks, it was done and I made it available for everyone on Devblast. Finally, I gave Devblast some love.

I started reading How Not To Die during that time and it totally changed my view of food and nutrition. Over the following weeks, I switched to a plant-based diet for health and sanitary reasons. That meant no more animal products (meat, milk, eggs) and it’s been going great so far.

I ended the year with a trip to France with my girlfriend. We stayed with my family for Christmas and then went sightseeing in Paris for a few days.

What a year! This post ended up longer than I thought. Before wrapping things up, I want to share what I’m doing differently in 2019.

I read the Miracle Morning a while back. I tried applying its teachings at the time, but it didn’t stick. Now is the perfect time to revisit them. I’m going to structure my mornings to be the most productive part of the day, sorting my activities by importance. I will do another post on that and how I’m able to work on Devblast while having a full-time job as Lead Engineer for OmiseGO.

I’m going full plant-based / vegan (the food, not the ideology, even if it does resonate with me to some extent). After reading Why we sleep, I’ve also changed my view of sleep. Sleeping less doesn’t make you a warrior, it’s just going to make you less creative and sicker. I’ve learned of the terrible effects that alcohol has on sleep, so I’m going to reduce how much I drink (I really didn’t drink much to start with).

3. Workout every day and get back into triathlons

I did a triathlon sprint, once. It was a blast, even if I was pretty slow. It took me more than a year, but I’m going back to it. I’ve signed up to the January race, here in Bangkok, and I will try to do the monthly sprints that take place an hour from my place. That means training, and losing weight!

4. Work on Devblast every day

Nothing much to say here. I want to grow Devblast and keep helping people become better engineers.

I feel reading has destroyed so many of my preconceived ideas in the past few months (and taught me so much) that I really need to keep going. The books in my backlog cover all kinds of topics: finance, investment, health, training and a bit of programming as well.

I’ve been living in Thailand for more than 5 years and I’m still not fluent. I can read slowly and write, but I’m lacking vocabulary. I’m going to use an app to learn new words every day.

7. More standing while working on the computer

I’m gonna mention another book, but as a software engineer, this is really important. We spent most of our days sitting, and this comes with dire consequences. In Eat Move Sleep, Rath, the author who is consistently living with the threat of tumors appearing in his body, has researched and compiled various scientific studies. Some of them show that sitting for more than 3 hours per day can reduce your life expectancy. The book is small and easy to read through, give it a try!

Anyway, I now have a standing desk at home and at the office and I’m going to try to spend at least 2 hours per day standing and working (and add hours from there).

That’s it! Thanks for reading. If you’d like me to go deeper into any of the topics I talked about, leave a comment or send me an email. I will try to write monthly updates on how things are going and if I’m sticking to my new habits.