Now that you know more about Modular Rails Architectures, I want to show you how you can build a very simple modular application. If you like it, don’t hesitate to subscribe to my newsletter below to learn when my book ‘Modular Rails’ (recently renamed) will be released.

This is the fifth article in the Modular Rails series. Here are the other posts:

We’re going to build a very simple web application: A Todo List! To create this app, we will first generate a Rails application that will act as our parent app. Inside, we will generate a ‘Todo’ engine. Let’s go!

The next step is to generate an engine!

We will also create an ‘engines’ folder to store the engines (even if we just have one!).

Now we need to add the Todo engine to the parent application Gemfile.

Let’s run bundle install. You should see the following in the list of gems:

Great, our Todo engine is loaded correctly! Before we start coding, we have one last thing to do: mount the Todo engine. We can do that in the routes.rb file in the parent app.

We are mounting it at / but we could also make it accessible at /todo. Since we have only one module, / is fine.

Now you can fire up your server and check it in your browser. You should see the default Rails view because we didn’t define any controllers/views yet. Let’s do that now!

We are going to scaffold a model named Task inside the Todo module but to correctly migrate the database from the parent application, we need to add a small initializer to the engine.rb file.

That’s it, now when we run migrations from the parent application, the migrations in the Todo engine will be loaded too.

Let’s create the Task model. The scaffold command needs to be run from the engine folder.

Run the migrations from the parent folder:

Now, we just need to define the root route inside the Todo engine:

If you check your browser, you should see the following: 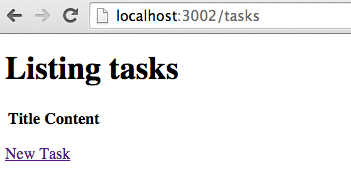 You can play with it, create tasks, delete them… Oh wait, the delete is not working! Why?! Well, it seems JQuery is not loaded, so let’s add it to the application.js file inside the engine!

Yay, now we can destroy tasks!

Well that’s it! We just built a super simple and ugly Todo app in a modular way. Obviously, this was a super easy example so you can understand how it works.

You can also checkout the book I wrote about modular applications : Modular Rails.

Don’t hesitate to subscribe to my newsletter in the form below or on the book website to receive a free sample of the book.

You don’t want to wait? You want to read more about Ruby on Rails and modularity right now? Check this F.A.Q about modularity!